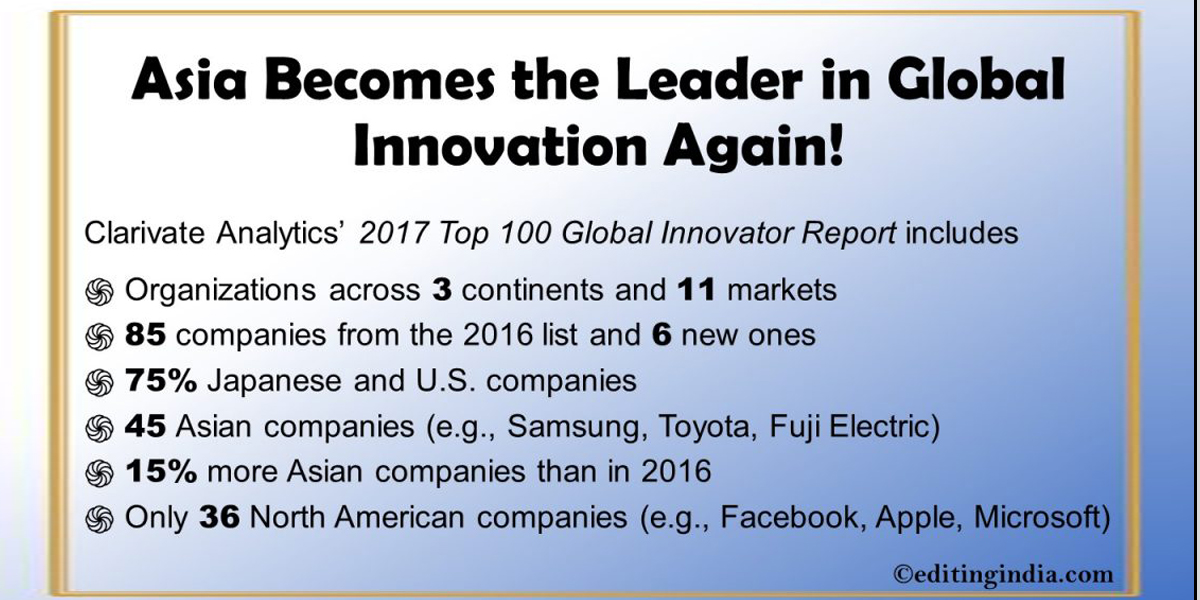 In January 2018, Clarivate Analytics (CA) published their much-awaited Top 100 Global Innovator Report, which highlighted the most successful organizations worldwide in 2017. These listed companies are actively into innovation through research and development, while protecting their intellectual property and achieving commercial success. The additional aim of this report is to support businesses prioritizing investment in unique and enduring inventions, which can earn patents and thus commercial success globally. For generating this report, CA analyzes patent and citation data across four main criteria, namely volume, success, globalization, and influence, by using CA solutions, including Derwent World Patents Index, Derwent Innovation, and Derwent Patents Citations Index.

The 2017 list includes organizations across 3 continents and 11 markets—85 from the 2016 list and 6 new ones. The innovation giants Japan and the United States account for 75% of the list. The 2017 list includes 45 Asian companies, a number 15% higher than that in 2016; the listed companies include some known companies, such as Samsung and Toyota, along with some newcomers, including Fuji Electric and Nichia. Contrary to 2016, only 36 North American companies have made it to the list, including newcomers (e.g., Facebook and Molex) along with the veterans (e.g., Apple and Microsoft).

Asian corporations also excelled over the other Top 100 companies in all metrics, which is an indicator of the region being a producer of high-quality and impactful innovation for commercializing it globally.

From a global perspective, the report indicates that the pace of patent filing by the Top 100 companies is slower than the ones outside the list. Nevertheless, these companies have brought innovation more successful to the market, which is the chief determinant of success. The overall of global patent filing volume has increased by 11.9% during the last 5 years; however, for the Top 100 organizations, this increase was as little as 2.4%. However, compared with the 3.4% increase for non-Top 100 companies, the number of patents granted to the Top 100 companies in 2017 has grown by 5.7% every year-over-year.